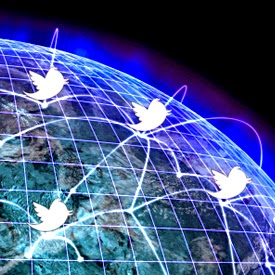 Maybe you aren't on any social media sites because you feel like they are narcissistic, materialistic, artificial, anti-social, harmful, or simply a waste of time.

I can understand some of those feelings, and I'm not thrilled with some of the potential side-effects/hurdles of social media, but I still think you should get on them, particularly on Twitter. Here's why.

Twitter is the quintessence of the instant globalization of society. With the right #hashtag, I can instantly share with/contribute to the global community.

I can tell my favorite author (@ramez) how much I loved his book (#nexus).. and he tweets back.

I can tweet about my first #honey harvest (#beekeeping) and an expert beekeeper from new Zealand congratulates me and engages me in conversation about treatments for mites (varroa destructor).

I can chat, real-time, every Saturday morning with educators from around the world at #satchat.

I can instantly publish my thoughts to/interact with the world with the right #hashtag.

Amazing. Not since #Gutenberg has such a seismic shift taken place. And that's an understatement. I think the printing press was nothing compared to what we'll see as a result of the #internet. Imagine all of the ideas of all of the minds of all of the people of the world suddenly connected and building off of each other. That's what's coming.

Reason #2: As a high school teacher, it's a blast to interact with my students about #chemistry (#chemaeos), #biology (#eosbio) & #science outside of class.

Posted by wgreen at 3:28 PM No comments:

The headmaster sat across the desk from me and listened as I explained my predicament. I was a new teacher, and my students hadn't done so well on their first honors chemistry test. Should I lower my standard?

"Absolutely not," he replied, "Make them come up to your level."

Then he told me a story.

An old headmaster was asked by a parent what would be a good course of study for her son. The old priest answered, "Any course of study is sufficient, as long as it is difficult and at least a little unpleasant."

I think most of my chemistry students would say that I listened to that old headmaster. I've always thought that the most important part of my job was to act as resistance training for their minds. But too often I've ended up with large test adjustments and students slipping through the cracks. So though it's still my mission to be like a demanding athletic coach in the classroom, I've been trying to make my rigor more responsive.

The most common modern educational meaning of rigor is "cognitive rigor," which involves Webb's Depth of Knowledge (DOK) and/or Bloom's Taxonomy. Both of these basically say that it's harder to apply knowledge and evaluate alternatives than it is to memorize and describe, especially when applying and evaluating in different contexts. Solving equations in math class is one thing, applying them to solve a problem in chemistry is another. The high levels of Bloom's and Webb's have a lot in common with critical thinking, which is one of the "4 Cs" of 21st century learning, along with communication, collaboration, and creativity.

One cool thing about this definition of rigor is that ALL students can achieve a high DOK level. For some, this might mean using addition and subtraction to create a budget. For others, it may mean using statistics to design an experiment. Both are rigorous for that student.

And this is where I have significant room for improvement. It requires attention to the needs of individual students, the way a good coach monitors each runner, swimmer, or player to keep them continuously pushing the envelope of their individual ability with each new skill. Auto racing driver Danica Patrick expressed this well in Honda's excellent video, Failure: The Secret to Success:

"You're driving your car and you feel frightened a little bit. We bump up against that feeling as much as we can to try and push that limit further and get comfortable there and then push it again."


But this is difficult in a traditional high school classroom, so I've been working on differentiated alternatives: a project- and mastery-based geology class, and a differentiated biology class. My flipped chemistry class is a step in that direction as well. By allowing students choice and flexibility in pace, process, and product, you allow for differences in readiness and interest.

Then, by using a mastery model, which allows multiple attempts until the standard is met, and providing ample, personalized support, you enable every student to reach rigorous standards. Ideally, the outcome is twofold: 1) every student leaves the school as a competent critical thinker, communicator, collaborator, and creator, and 2) they learn perseverance (grit? a subject for a later post). In short, they are die-hard mental athletes, and you are their crazy coach.

And I think that was the message behind that old headmaster's advice. The content itself doesn't matter, "Any course of study is sufficient, as long as it is difficult and at least a little unpleasant." I'd just add one thing. It should be difficult because it teaches the student to think critically, collaborate, create, and communicate, because these are the skills they'll need to reach their potentials in the 21st century (and beyond). And it should be personalized, so that every student succeeds.
Posted by wgreen at 4:55 AM No comments: