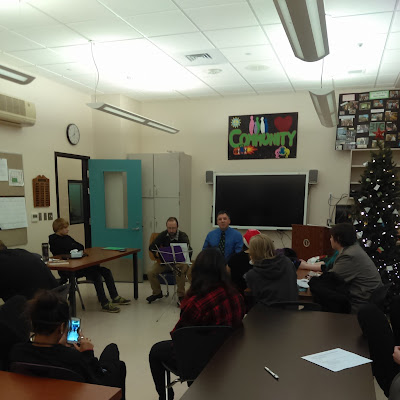 Let's just say the Depot is not without its crises and conflicts. Hardly a day goes by without some drama unfolding. Many of these young people are being  battered by life, and many lack the resiliency or the skills to cope. Sometimes the strife ripples out into our little community like a gathering thunderstorm, or else it hangs in the air like black magic.

But just as frequently, light breaks through the clouds.

Like the excitement of one struggling young person who landed his first internship last week, and another young lady whose internship just turned into a job at a law firm.

There's the excitement among the staff as we plan new supports for students.

There's the generosity of a young lady who baked twelve dozen cookies for everyone, and the seven students who worked all morning yesterday cooking a delicious ham dinner for the whole school.

There are the smiles on faces that haven't seen many smiles lately, as they picked out an unwrapped gift during the Yankee swap.

And there are the courageous young women who sang impromptu songs for our open mic.

But the brightest light this week came from one powerful young man whose courage and compassion just blew me away. The past month has been just one painful blow after another for him, and on top of all that, a friend at the school has been seething with anger towards him for a week. So he decided to do something about it.

First, he approached his angry friend and tried to initiate a conversation: "Hey, man, we have to talk about this.." he began, and then explained his side of the story.

There was no response to this initial effort: the other student just turned away. But that wasn't the end of it. Later that day, as the angry student was sitting for the Yankee swap, this powerful young man approached him again. He came up behind him, and I heard him say something like, "I may get punched in the face for this hug, but I'm doing it anyway."

Then he wrapped his arms around this angry student, and that frown that had been there all week just... broke. It broke into a smile, though this angry kid tried to fight it. That bear hug broke through that anger like a the sun through storm clouds.

Thank you, young man, for reminding me what it's all about--what being human is all about.
Posted by wgreen at 7:28 AM No comments:

Changing school from a filter to a foothold 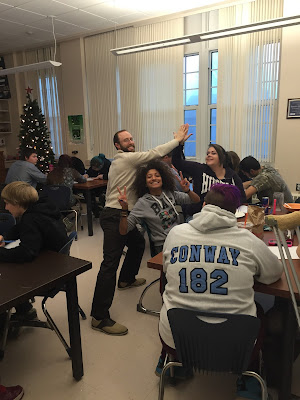 When students are failing, we can blame it on a family issue, some supposed character flaw, or other factor out of our control, but what good will that do? We can let them fail, pass them off to someone else, or just graduate them even though they're not ready. But what good would that do?

What if, instead, we responded by increasing support?

At the Depot, we value personalized education. Our advisors (teachers) meet at least twice per year with parents and students to design individualized learning plans that outline projects the students will do, competency goals, advisory work, online math work, etc.

But the independent learning environment that lies at the heart of the Depot requires a lot of soft skills (conscientiousness, self-control, organization, etc.) and basic hard skills (reading, writing, math) that many students lack.

It dawned on me that we really need a tiered SRBI-style support system. Tier I is the current advisory/self-directed learning model. Students not being successful there can be moved to a second tier: group workshops, like our successful Senior Project Boot Camp and focused 1:1 sessions to help students complete projects, writing assignments, etc.

Just last week, a student who had been struggling to get started on his independent project since the beginning of the school year started and finished the first step in one focused, 2 hour session.

Students needing more support would move to a third tier. This highest level of support could include moving to a special support "advisory" for part or all of each day.

This is just a rough sketch, but I was excited when this resonated with some colleagues this week.

And of course, it needs to apply to behavioral issues as well. This week I did my second real restorative circle, and these are a powerful Tier II behavioral support, one that could lead to other supports such as weekly check-ins and counselling.

As I've told a couple of students this week, this is really about making sure they get the skills they need succeed, whether those are academic skills, social skills, or self-control.

I know that we won't be able to help everyone. I know there will be some who simply refuse our help, or whose needs exceed our capacity, but until that becomes clear, our job is to keeping ramping up support.

School should not be a filter, to filter out those who don't meet the standard. It's not a service for the elite--for those who can already teach themselves, or whose home lives have already ensured their success. It needs to be for everyone.

It can't be a filter. It's got to be a foothold, a foundation, a fulcrum.

We humans aren't built to thrive in a weed-out-the-weak, social Darwinist world. We're much too interconnected for that. We're built to support each other.
Posted by wgreen at 4:28 AM No comments: 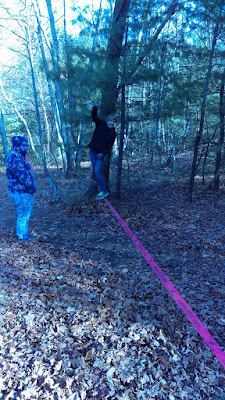 That's one of our students on the slackine. It was one of our Friday Fitness options this week. It's much harder than it looks, but it's an addictive blast. And he was fully engaged. How can we get students to be this engaged in learning?

For this week's "pick-me-up" activity on Friday morning, I gave the students the data we've been collecting on engagement. Ellen, our instructional assistant, has been walking around at random times each day recording how many students are on-task. As I told the kids Friday morning, "on-task" is not the same as engagement, and certainly not the same as flow, but it'll have to do for now.

So I handed out the data--just a list dates, times, and percentages, telling them that I wanted them to be a part of this whole "empowerment evaluation" process I'm trying to implement here. I told them I wanted them to have a say in improving their school.

I talked about doing science on ourselves. Research. Making hypotheses and testing them against the data--looking for patterns.

And then what happened?


Well, there was at least one comment along the lines of "Man, we suck!"

There was also some blank staring at the sheet.

But there was also plenty of discussion, and plenty of observations being thrown around.

A few were surprised that Monday was so high. There was at least one hypothesis about why that was the case.

Many noticed that Tuesday and Thursday were very low. But this didn't surprise anyone, since these are the internship days, when fewer students are here, and those who are here are waiting to go to internship or returning from internship.

So I asked them the central question, "Would you like to see these numbers increase?" After a few heartfelt answers of "Yes!" I reminded them that if you want to see something change, you have to change something. You can't keep doing everything the same and expect results to change (seems like I've heard that somewhere before...).


As I walked around checking on their work, there were several students jotting things down on the data sheet, but one student in particular stood out. His sheet was covered in calculations. He was a picture of engagement. In fact, I'm pretty sure he was in flow.

I asked what he was finding, and he told me that he'd figured out that Wednesday's had the highest engagement, followed by Mondays and then Fridays. He'd done this by summing up all of the percentages for each day.

Why didn't he use the average? Because he was starting from where he was. I'm not sure he knew what an average was, or that it could apply here. Instead, he was working with what he knew to solve a new and meaningful problem.

Later, when he was back in his classroom, still working on the problem, I saw that he had a table constructed that included the numbers of data points for each day of the week. He had figured out that the different numbers of measurements on each day were important. When I asked him about it the problem, he replied, "Yeah, I know. I'm gonna even that out later." 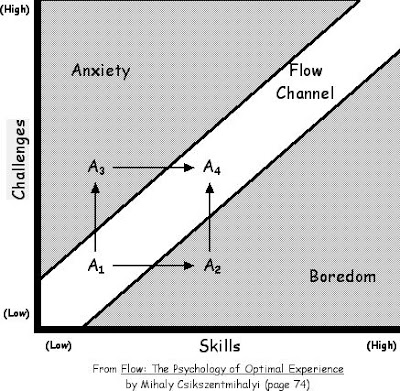 He didn't have to do it (Autonomy).

He was in his flow channel (Mastery).

He was working on a real problem--to figure out what was happening with student engagement at his school (Purpose).

"One of the techniques for solving problems is called Bright Spots Analysis," I had told the students earlier that morning. "You look at the best days, and ask yourself why they are the best, and you try to replicate that."

Now if we can just replicate that.
Posted by wgreen at 1:22 PM No comments: