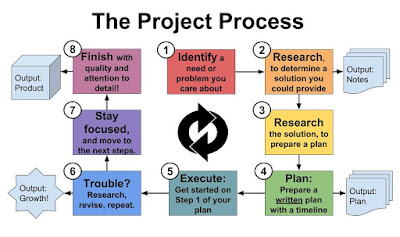 "I do not like Project Block. Nobody likes it. Everybody hates it."

That was what one student said as he came in and plopped down in his seat for "Project Block" this week.

It's just one of the big changes we've made this year at E. O. Smith's Depot Campus. For an hour and half, three times a week, we get all the students together in the Big Room, with Ellen and our new UCONN interns, Rose and Nick, and we work on projects together. It's meant to be a scaffold--to help them learn how to plan and carry out their own projects.

As I explained to my disgruntled student, even though our school was built on an independent learning model, there was too little of that going on--our students simply lacked the skills.

And they have to work hard during this block. We put a big timer on the screen, and for ten minutes they have to be 100% focussed on their work--no phones, Youtube, or talking. We take a short break, then repeat. The goal is to break the process down into short-term goals and build their ability to focus. A successful ten minute run means a poker chip, and poker chips add up to credits and rewards.

Last Wednesday, they worked through five 10-minute cycles like that, and they cranked through their biomes powerpoints, which are the first project in our climate change theme.

Each project will focus on a part of the project process, and we'll gradually release responsibility to them until they are able to work independently for an hour and a half, three days a week, on their own projects.

It's just one of the big changes we've made as we continue to work to build the Depot into a place known for hard work and innovation--a place where students can stand out through real world experience and really cool independent projects.


Of course, I expect a little resistance along the way, but that's OK. It's not supposed to be easy. It's supposed to make us stronger.

That goes for me and them.
Posted by wgreen at 7:41 AM No comments: