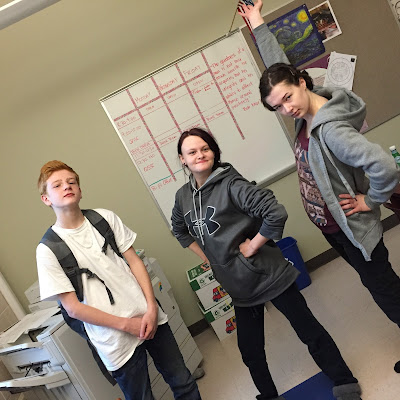 What if school was like an athletic team practice?

I was in a Twitter chat yesterday morning on the topic of school culture, and one teacher said a positive school culture "feels like home, looks like an athletic team practice."

What a beautiful and powerful image! What if kids came in all fired up (and maybe nervous), asking what the workout was going to be? What if school was like CrossFit for the mind? What would that look like?

To begin with, it would be highly structured. As I've written before, I've gone through a paradigm shift since I've been at the Depot. I used to think the less structure, the better. I imagined an organic, self-organizing, project-based learning environment in which students would be naturally motivated to learn. I found out the independent learning process needs to be scaffolded. At the Depot, we give the students tremendous freedom and hope they'll engage in complex projects on their own, but they often don't, and I think it's because they lack skills and confidence. They need more structure at the beginning. Then you remove the scaffolding as they progress until they are ready for full-blown independent learning. (Click here for a rough sketch of what that might look like.)

That structure would include plenty of explicit instruction, drill, and practice in basic skills with tons of feedback. Students need to master basic skills--math, reading, communication, planning, time management, self-control, motivation, and a sense of self-confidence before they will be able to design and tackle complex projects on their own.

Complex tasks are, after all, made of of simple parts put together. You may be able to teach them in context, but there's a reason basketball practice is not all made up of scrimmages.


As a thought experiment, I tried to imagine applying a project-based learning approach to a skill like Olympic lifting: "OK guys, in order to get stronger and be able to lift more weight, I'm just going to have you guys build a barn!" Nope. Won't work. Olympic lifting is a set of very complex movements and skills. Check out this video of just one movement--the snatch. It's even harder than it looks, and barn raising won't teach you that. On the other hand, how about training in all of the Olympic lifting movements and then going to the barn raising. Now we're talking. You may need to be told what to lift, but I'll bet you won't have any trouble lifting it. In other words, extract the skills, drill, and then reinsert them into the context, and do it all deliberately and intentionally.

Finally, in a world where school is a sport, there would be lots of goal setting and tracking, and tons of motivation, engagement, energy and celebration of small wins, big achievements and effort. Some of our students have been working on fitness goals that they set a couple of months ago. One group is working towards a 3:30 plank. They meet every day to increase by 10 seconds. Imagine if students approached all of their learning the same way?

I used to imagine that just by doing relevant and interesting projects the kids would learn. Now I see that is wishful thinking. Instead, let's turn the equation around--give them a strong set of essential skills first--and then they'll be ready for the heavy lifting of complex and creative tasks. They'll have the skills and they'll be ready for the game... and life.
Posted by wgreen at 9:47 AM No comments: 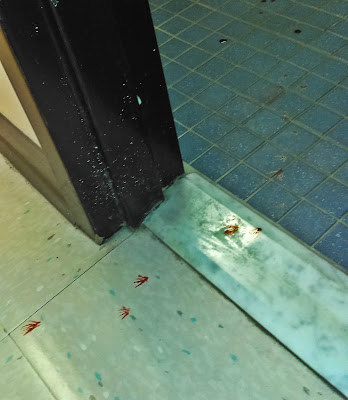 The guinea pig was missing, and they had to solve the crime.

The bloody guinea pig footprints were the most obvious evidence, but they they would have to analyze three more challenging clues: fingerprints, hair left at the scene, and blood spatter patterns.

It was all set up by one of our seniors. She's exactly the sort of student who thrives in this kind of school: independent, self-motivated, and focused on a passionate interest. In her case, that interest is forensic science.

The students, as you will see, loved it, but this senior has such high standards for herself that she could only see what went wrong.

This post is for her and all of my students who've had the wind in their faces for so long they have trouble seeing their successes and strengths.

This is for her, because the students did it. They took notes as she gave them instructions. They looked under microscopes at hair they collected from the scene and compared it to hair from suspects. They experimented with the fake blood, dropping it from different heights until it matched the drops on the floor of the bathroom. They collected fingerprints from suspects and compared the whorls and loops to those found on the bathroom sink.

To sum it up, they had fun, even those who said they didn't, and they did a bunch of things they'd never done before, hopefully learning some critical thinking along they way.

But it didn't get off to a good start. The fingerprint dusting technique didn't work, and this student leader was ready to give up. True, she could have been better prepared. For example, she definitely should have tried the fingerprinting technique out before hand. But we've all been there, under-prepared, and every failure is a lesson learned. Next time, I told her, she'll be prepared. 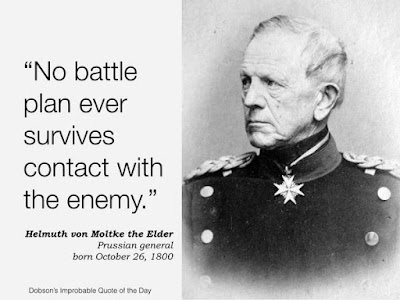 And of course, as every teacher and leader knows,  "No battle plan survives contact with the enemy." No matter how much we plan, we need to be ready for the unpredictable interactions of our plan with human beings and the rest of reality. Our plan is not always at fault--it's just the nature of the universe to throw us curve balls, keep us on our toes and keep us strong.

"Failure," as a Honda engineer says in my all-time favorite video, "is the by-product of pushing the envelope." That's one reason I love CrossFit--it makes me push up against that envelope at least 3 or 4 times per week. I fail at something every time I work out. Every WOD kicks my butt and humbles me. Every Olympic lifting movement I do is a messy mixture of correct and incorrect parts, mostly incorrect.

School and work are fitness for the mind. Push the envelope, and aim high enough that you can expect failure, because failure is fuel. It gives us information to improve, and if we persevere, that's why we'll succeed, as Michael Jordan so powerfully put it. SpaceX persevered through four catastrophic failures of their Falcon rocket's ocean landings, but on their fifth try, just yesterday, they hit it: success. 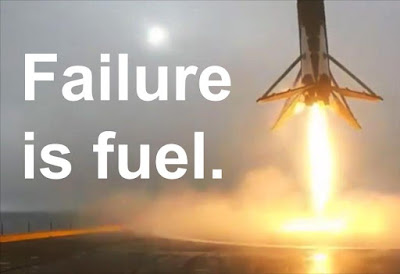 As Mazer Rackham said in Ender's Game, "No one but the enemy will ever teach you how to destroy and conquer. Only the enemy shows you where you are weak."

In one sense, failure is our enemy, but in another, our friend. It shows us where we can improve, so that we can.

So this is my message to you, my forensic-scientist-to-be senior, and all of my students who have met with frustration so often that they can't see their success--whose lives have been just one huge obstacle after another:

1. Be open to seeing your successes, like the fun our students had with your workshop, even if they're mixed with failure, because you really are capable and successful, and

2. Embrace failure, because it is just a by-product of growth. It doesn't mean you're a failure. It means just the opposite: It means you are improving.

3. Don't expect perfection. It's a myth. Expect improvement. Demand constant improvement from yourself. You deserve it, and you are capable of it.

4. And you are improving. You're already awesome, you've already passed through so much fire, and you're only getting better. I can see it.

Posted by wgreen at 1:50 PM No comments:

Can you tip a school culture? 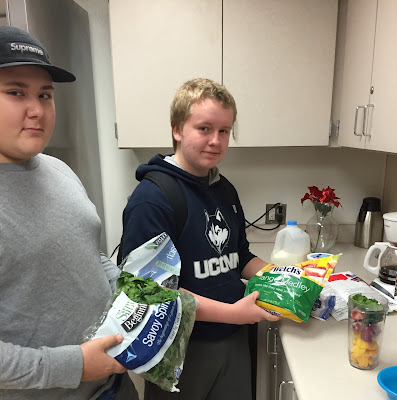 “Character, then, isn't what we think it is or, rather, what we want it to be. It isn't a stable, easily identifiable set of closely related traits... Character is... dependent, at certain times, on circumstance and context.”


How is the context of our school influencing what we would call the character of our students?

How many of the negative behaviors we see are the natural, predictable result of the social environment and structure of the school?

Listening to Gladwell's Tipping Point got me thinking about these questions again. He calls it "the power of context," and it reminds me of one of Chip and Dan Heath's powerful principles: "What looks like a people problem is often a situation problem."

So what happens if you put a bunch of struggling students from tough family backgrounds, with motivation problems, negative experiences with school, and  social/emotional challenges, all together in one class or school?

And what's the solution? That's also obvious. You make sure you integrate the struggling kids with good peer role models, as many of them as possible.

At the Depot, we're working on this, but I'm also interested in finding other tipping point triggers we could use.

Gladwell argues that the 1980s NYC crime epidemic was actually curbed by scrubbing graffiti from the subway trains and stopping fare-beaters from jumping the turnstiles. These small changes sent "signals" that had a cascading effect throughout the city.

I'm wondering if there are signals we're sending that could be changed or new ones we could send that might help us "tip" the Depot into the higher-expectations, self-motivated environment we're shooting for.

We don't have any graffiti on the walls--we have a beautiful building, but is there disorder, are there little things we could address. Are there ways we could change the structure so the culture would shift? Are there keystone habits, key changes that would have a cascading impact?

Some of our efforts so far this year include:


School culture and climate are so key, but they seem to have so much inertia. Gladwell's hypothesis gives me hope that they might be changed more easily than I expect. "Look at the world around you," he writes, "It may seem like an immovable, implacable place. It is not. With the slightest push--in just the right place--it can be tipped."
Posted by wgreen at 5:49 AM No comments: