The procrastination equation: Putting research into practice at the Depot 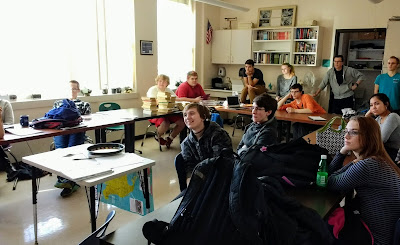 They were discussing different forms of government, and the conversation had degenerated into a frustrating chorus of "There is no right answer. It's all just a matter of opinion."

"That's not true," I said, trying to keep the frustration out of my voice. "There are benchmarks. Some forms of government work better than others."

I'm not sure they got my point, but that kind of relativism is one of my pet peeves. Unfortunately, it infects many parts of society, including education. People in education often think that there are no real answers--no reference points by which to judge between the myriad of models and practices that promise to improve student success. But that's not true. Research has shown what works. The same science that brought us modern medicine and discovered global warming can help us educate our kids, and if we're not using it, we're fighting this battle blindfolded. Here's the story of how we're putting research into practice at the Depot, and how it's impacting our kids.

Utility is "how desirable a task or choice is for an individual." Expectancy is whether we think we will be able to complete the task, value is how much we value the outcome, the more impulsive among us will have a greater tendency to procrastinate, and the further away the deadline (the greater the delay), the more we'll put off the work.

Using the equation is simple. If utility is low, we procrastinate. To decrease procrastination, we need to increase expectancy and value and decrease impulsivity and delay. At the Depot this year, we're attacking all four factors of the equation.

Expectancy: According to Stanford psychologist Albert Bandura, "efficacy expectancy is somewhat susceptible to verbal persuasion and emotional arousal but is especially influenced by modelling and actual performance accomplishments." With this in mind, we are increasing our use of explicit instruction at the Depot, and our new Project Block is designed to provide students with a string of small successes to build upon. As of last week, about 60% of our students had completed 8 science projects, including hands-on projects, lab reports and a research paper, and had begun their first independent project.

The ALEKS online math system, which we also started using this year, is another way we're building self-efficacy. It offers a mastery-based approach the kids love, and our students' average progress on their courses is 54%.

And finally, we've really ramped up the 1:1 support this year. With a combination of interns and an instructional assistant, we are able to assign struggling students one-on-one help during ALEKS, Project Block, and any other time they need it.

Value: Dr. Steel points to classical conditioning as one way to increase the value factor. During our summer program, we were having trouble getting kids to do their online math work, so I was tossing around the idea of a token-based incentive system with Ellen. I had planned to make the tokens worth credits. "But what if they don't care about credits?," she asked.

She was right. Many of our students don't seem to be motivated by threats of credit loss or offers of credit. So what did we do? We still offered credit, but we also tied the tokens to a field trip reward, and it worked. They really valued that reward!

We carried that same approach over into this year: Students earn poker chips for on-task behavior, and if they earn enough, they qualify for special field trips. Many students use our new progress tracking system to keep track of their chips and they value them so much that their anxiety about the chips has actually become a bit of a problem. My hope is that this system will build the habits of work that we adults call intrinsic motivation. According to Steel, this is exactly what happens--students associate reward with the work, and the work becomes intrinsically rewarding.

(Of course, they don't always succeed. The other day, I told a student he would not have enough chips to qualify for the field trip the next day. He pushed his few chips away on the table as if to disavow them and said, "I don't want any more chips!" His protest reminded me of my son when he was young. He wouldn't eat his Thanksgiving dinner, and the consequence was not getting any pie. "I don't like pie!," he repeated, as he marched around the table. The fact that chips can tap into their emotion is testimony that we've tapped into the value factor.)

Impulsivity:  Impulsivity is considered a personality trait, and Steel questions whether we can influence it much, but he does suggest two possibilities: stimulus control and automaticity. "Stimulus control," says Steel, "helps to direct behavior by indicating what is appropriate (i.e., rewarding) under any given circumstance," and I think the chips serve this purpose also. If students stay off their phones and on-task for 10, 15, or 20 minutes (we gradually increase the blocks of time), they receive reward chips. Most students earn the full amount of chips available during ALEKS Block and Project Block, and it's surprising to see how easily most of them can focus for 20 solid minutes under these conditions.

To increase automaticity, Steel recommends schedules and routines. This year we've implemented a new blocked schedule at the Depot, but there's more we could do with routines within the blocks themselves. Interestingly, Steel also mentions reducing choice as a means of helping those with high impulsivity. I think the blocked schedule has also helped here, especially the replacement of "self-directed learning time" with Project Block, but I'm still chewing on this one.

We've also added another research-based strategy to the mix to try to address the impulsivity factor--one that Steel didn't mention. Stephen, one of our teachers, has been teaching mindfulness during morning pick-me-up since the beginning of the year. They've gone over several techniques, from focusing on the breath to mindful eating, and they had a great time identifying thoughts and feeling invoked by popular songs the other day. Several students have said they have started to practice meditation on their own. Our hope is that this will help them not only manage stress but also increase focus.

Delay: Our new progress tracking system is designed to give students continuous, rapid feedback about their progress, and the timed chip blocks have provided small chunked goals for the students, but I think we can help students a lot more with handling delays. My goal for the second semester is to explicitly teach the students two methods of time/project management, and then reward them for each box checked off their to-do lists. (Hat tip to Elizabeth Brott Beese, a Ph.D. student from Purdue who spent some time studying our program, for pointing me in this direction.)

That is how we're using science to help our students. That's our goal, anyway, and so far it seems to be working. Engagement is up, attendance is up, and even task completion seems to be up. I was so excited to find Steel's article last year. It has provided a framework--a science-based guide for improving our program. So often in education, we bounce from one model to another, often without much confidence that any of it will work. But there's no need for that. There is a research base in psychology and education that we can use and build on. We're not blind, we don't stumble in the dark, and we don't have to reinvent the wheel. We can't afford to. Time is precious for every one of our students.
Posted by wgreen at 10:34 AM 1 comment: