Change is tough: The slogging phase 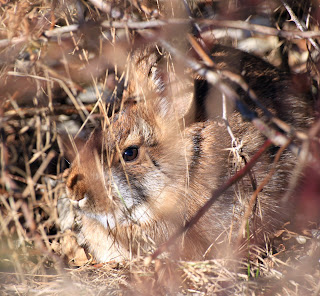 "I'm done with my chores now. It's time. I say my prayer and head out on the hunt. The sun isn't up yet; it's cold; the fields are sopping. Brambles scratch my ankles, branches snap back in my face. The hill is a sonofabitch but what can you do? Set one foot in front of another and keep climbing.

An hour passes. I'm warmer now, the pace has got my blood going. The years have taught me one skill: how to be miserable. I know how to shut up and keep humping. This is a great asset because it's human, the proper role for a mortal. It does not offend the gods, but elicits their intercession.

My bitching self is receding now. The instincts are taking over. Another hour passes. I turn the corner of a thicket and there he is: the nice fat hare I knew would show up if I just kept plugging."

-Steven Pressfield, The War of Art Not sure exactly where I am in the hype cycle right now, but it's somewhere after the "Peak of Inflated Expectations." I'm in that phase when blogging about all the cool things that are happening, like our awesome Gallery Night and progress on our progress tracking system would seem empty. It would violate Ryan Holiday's rule of not talking about projects until they are almost entirely done. He says it's too easy to trade doing for talking about doing--to blog, post, tweet and brag about all the cool things we are up to and in the end produce nothing. Talk, Holiday says, is the enemy of work, and I'm in the work phase.

But it's also that phase when you can't stop--when you know you have to keep going, because you know in your heart and mind you are on the right track.

Last year was my first year in administration--my first year at the Depot, and I started with Barry Jentz and Jerome Murphy's Entry Plan approach. I rode over the top of the hype cycle right about then, disillusioned with the autonomy-based approach to education, and landed in the "Trough of Disillusionment." We did a program evaluation and immediately started up the slope with a set of changes we thought were needed.

It's tough not knowing where you are on that slope. I hope we're headed into the "Plateau of Productivity." There's a bunch of stuff in place, and data is coming in, but it's too early to tell for sure. So right now, we keep plugging, waiting for that rabbit to show up.

And I think it's right around the corner.
Posted by wgreen at 2:19 PM No comments: