The obstacle becomes the path: A short commencement speech

There is an old Zen story about a king whose people had grown soft. He wanted to teach them a lesson, so he put a big rock in the middle of the main path to town, blocking the road. Then he hid in the woods to watch what they did.

One by one they came. Most just complained. Some would try a little to move it, then give up.

Finally, one lone peasant came along. He pushed and pushed at the rock. Tried to get his hands under it and lift. Nothing worked. Then he had an idea. He went into the woods and got a large branch and used it as a lever to move the rock.

Under the rock the king had hid a purse of gold and a note that said: “The obstacle in the path becomes the path. Never forget, within every obstacle is an opportunity to improve our condition.”*

You have all had your share of obstacles in your paths. But you didn’t give up. You found new levers.

And you found new strength.

Don’t forget that there are always other levers, and there will always be new strength.

High school will not be your last obstacle. I can guarantee that.

So remember this lesson. Remember what happened when you didn’t give up.

Remember how the obstacle became your path.

And don’t give up.

I hope that you have also learned a few things about effort--that it’s not easy to move those stones, even with a lever.

But effort pays off with new opportunities.

Now that you’ve graduated, you automatically have multiplied your opportunities.

You can repeat that process of multiplication. Every obstacle you overcome, every challenge you take on will be a multiplier.

That’s the point. It’s not about gold purses. I think the purse of gold coins was a little lame, actually.

Here’s my version: The guy works and works on the stone until he gets so strong he can move it. He becomes like Hercules. And then he walks to the city and gets a job as the king’s own bodyguard. Or something like that.

Or maybe this version: She moves the stone and finds that the path beyond is not just one path, but a whole bunch of paths to places she hadn’t even dreamed of.

The point is, the obstacle doesn’t become a prize. It becomes a path. A new path.

And here’s the other problem with the story. You’re not alone. You don’t need to move the stone alone. Reach out for help. That guy or girl should have gone and gotten some help with that lever. The story would be just as cool and so would you. Asking for help is not a sign of weakness. It takes guts to ask for help, just like it takes guts to keep pushing at those stones that don’t seem to budge and to go looking for levers.

See, that’s the other benefit to obstacles. They draw us together with other people, and that’s what’s really important in life.

So congratulations Depot Graduates! You moved this stone! And I am excited to see what you find beyond it!

And good luck as you continue on your paths and convert more obstacles into new paths to success.

*Thanks to Ryan Holiday for the Zen story and for his excellent book, The Obstacle Is the Way.
Posted by wgreen at 11:18 AM No comments: 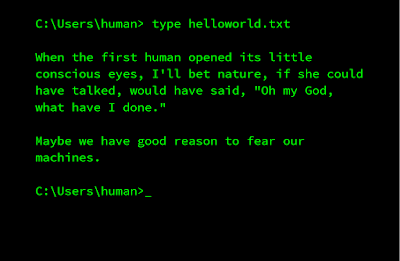 I'm not saying this is all we teach. Flex, tech, and checks is just about practicality. We need equal emphasis on the humanities. We are, for now, still human, and while we wait for what's next, we still need to live fulfilling lives in this humble organic substrate. In my mind, that means art, music, philosophy, writing, and history (sounds a lot like STEAM, now that I think about it). Nor am I saying this will guarantee that our species will not go extinct before the next turn of the century, but it may give us a fighting chance of having a say in what's next.
Posted by wgreen at 12:11 PM No comments: