Three things I'm learning as an educator in the pandemic 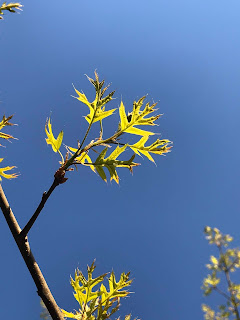 Since the quarantine began, I've had this nagging feeling that this is our chance to break free--that the jailer just unlocked our cells and all we have to do is walk out. And I've been trying to figure out where that feeling is coming from. Now I think I know. It's coming from at least three directions:

1) The system is broken


Something about our modern system clearly isn't working. We were obviously not prepared for this thing, though we had been warned for years of the likelihood of a pandemic. And despite our insane level of prosperity and technological advancement, we clearly cannot take care of our most physically and economically vulnerable.

As an educator, this comes home with a vengeance as I realize I cannot support my most vulnerable students at this time. It's hard enough when I have them in-person, but now that they are home, it's impossible. Not that I don't try. In some cases I talk to them every day, but I cannot control their home environments, and I cannot be there to keep them on task and encourage them, and these kids need tremendous help focusing and staying motivated and just completing academic tasks others find easy.

As an educator, I have always believed all it would take is the right new idea and we could reach all of our students. In the past, I thought it might be inquiry-based education, the flipped classroom, the mastery-based approach, or project-based learning. And while some of these approaches have helped, none of them have solved the problem.

And this lockdown has brought this all into focus. The problem doesn't stem from the classroom and it can't be solved in the classroom, and certainly not over a Zoom call. It's a much larger problem that has to do with poverty and lack of family and community supports and systemic injustices and years of being part of a machine that doesn't care about people.

The system is broken, or at least, it doesn't work for us. It burns us as fuel. It's no wonder that the powers that be are so desperate for us to open up and get back to work. The system is like a car running on fumes right now, and it's desperate. And don't get me wrong, I want to us to open up also--I want to get back to teaching and leading face-to-face, back to the trail, the gym, visit new breweries, and I want people to be able to open up their businesses and support themselves and their families. But the machine doesn't care about us. And it's not just the threat of the virus it doesn't care about.


Sitting here every day at my home workstation, looking out at my yard and gardens, I've been thinking a lot about work. I've been thinking about how much I work, and why. And as I watch friends on Facebook getting into new and old hobbies, baking bread, brewing, gardening, I have to wonder: Are we doing it wrong?

My old architectural drafting teacher was frustrated when we said we had to work. He thought we should spend time outside of school honing our skills.

"Because we need to pay for our cars," we replied.

"We need them to get to work," we replied.

To which he just raised his hands, palm up, and shrugged.

Christopher Ryan, author of Sex at Dawn, tells the story of three natives of Tierra del Fuego. They  were brought to England by Captain Fitzroy of the HMS Beagle to learn the ways civilization, in hopes they would serve as missionaries to their own people. But when they were returned to their homeland, they just reverted to their old way of life--a primitive, hunter-gatherer lifestyle. The good Captain offered to bring one of them back to England, but the tribesman declined, saying he hadn't "the least wish to return to England," because he was "happy and contented" with "plenty fruits," "plenty fish," and "plenty birdies."

Jared Diamond, author of the book, Guns, Germ's and Steel, tells a similar story of a Kalahari bushman was asked why his tribe hadn't switched from their hunter-gatherer lifestyle to agriculture. He replied, "Why should we, when there are so many mongongo nuts in the world?"

This may seem like pie-in-the-sky hippie fantasy, especially to Americans like me brought up steeped in the protestant work ethic, but as cartoonist and writer Tim Kreider humorously points out, "It was the puritans who perverted work into a virtue, evidently forgetting that god meant it as a punishment."

We live in an age of abundance, and here we are all running around all the time in fight-or-flight mode trying to survive.

And here we are as educators pushing all of our students onto the treadmill of high school-college-work-more work-retirement-death, I have to wonder if this is the right thing to be teaching them. Actually, I know it's not.

And maybe, if we changed the way we work, we'd have more time for other people and for building the communities and connections we've lost over the years.

3) Our communities are broken


One of the best books I've listened to in recent years is Lost Connections by Johann Hari. Hari argues that the reason we are seeing more depression and anxiety in today's society is that we have lost our connections--to each other, our communities, meaningful work, and nature.

The lockdown has made this even clearer to me. I think we are on the verge of a major epidemic of mental illness stemming from this thing. We are hypersocial creatures, and I'm afraid that Zoom calls just don't cut it. I feel it myself, the need for human contact, and I hear it from my students. It's the most common thing they talk about when asked about the challenges they are facing in lockdown--they want to see their friends.

These kids need school. They need in-person school. And they need it badly, and soon. As someone who once said, "If there is hope for education, it's online," I now officially have to admit that this is not true. I used to believe that technology could be the great equalizer, and I think it still plays a role in that, but it's not enough. This giant distance-learning experiment has proved that to me. At least with current technology and the current state of our society, our most vulnerable kids need in-person instruction.

And for me, this could be the biggest lesson of all: That schools have become essential as community supports in a world that has lost most of its community supports. And this new role of schools needs to be our new priority as we move forward next fall, next year, and into the next decade.

Posted by wgreen at 5:16 AM No comments: