Transforming discipline to transform people: Our first restorative circle at the Depot 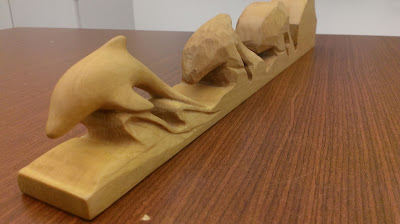 Four students, two staff and I sat in a circle. The looks on some of the faces were less than happy. One student was clearly angry about being included at all. He sat hunched over, hood up, glaring at the floor.

I began by asking "What happened?," and then I passed the "talking stick," which in our case depicts a carved dolphin emerging from the wood, to the first student in the circle

He passed the stick to the next student without talking, his eyes were also on the floor.

The next student gave a very short explanation of one part of the incident, and passed the to the angry student, who passed it to the last, who passed it, silently, to the first staff member.


At this point, I was getting nervous about this little process called a "restorative circle." I'd been reading about restorative practices, and this was my first real try at it. And it wasn't off to a great start.

And there just happened to be a random cake in the parking lot they were passing through at the time. Yep. There was a big cake just sitting on the ground. Need I say more?


Now, I like having fun as much as any other homo sapiens, and I recall my own teen years quite well. The problem was, a community member saw them and called the school.

So now, as we sat in the circle, I asked, "What can we do to make it right?," and I passed the stick around again.

The first student passed it again without talking. The second student repeated a strategy we had discussed the day after it happened: They would go on another hike and do it right this time--to show the staff and community they could behave themselves.

The next two students passed it again without speaking, and I decided it was time to adjust my strategy. I doubled down on one staff member's description of what was wrong about this incident, re-emphasizing that our school had actually been opposed by some members of the community when it was founded 7 years ago, how important the community's perception of the school is, and how several students, one of whom was there in the circle, had previously expressed concern to me about the school's reputation.

I passed the dolphin stick again, and this time, another student spoke up: "Let's bake a cake for the community members that reported us and write 'I'm sorry' on it."

I liked the idea, and it was cool to see her thinking creatively and restoratively about the problem.


Next, a staff member mentioned cleaning the street, and that brought a third student into the conversation. He was opposed to the street-cleaning idea, but liked the others.

Now we had three students owning it. We just needed one more.

Finally, the fourth student spoke up, but he still didn't see himself as having done anything wrong, even after I explained again that the real point here was not about right and wrong, but our relationship with the community. Though he still didn't own his part, I couldn't help but wonder what effect the appropriate responses of his peers was going to have on him.

Two days later, the five of them (one had been absent on the day of the circle) baked and decorated the cake, and delivered it, on their hike, to the community members. On the way, as they decided among themselves who would be their spokesperson, the resistant student once again said he'd done nothing wrong. This time, another student explained to him the importance of our image in the community, and that that was what this was all about.

It was great to see the students confronting their own behaviors and taking on challenging restorative conversations. It's just as much about them growing as it is about healing relationships, and it's amazing to be a part of their growth like this.

That's what that wooden dolphin thing is all about. It's the students emerging from what they were into what they could be.

It's really about me, too. This is all new to me, and when people ask how it's going, I always say it's challenging, but in a good way.

I'm excited about the potential of these restorative practices for helping these students transform their lives. And I'm thinking (hoping) I won't escape unchanged either.
Posted by wgreen at 9:15 AM