Science, math, and choice at the Depot

This blood-typing experiment was a great way to kick off the week! The meticulous way this student handled the samples was beautiful to watch. But the best thing about it was that she chose this experiment, sort of.

The Big Picture model doesn't rely on a traditional curriculum. Theoretically, student interest drives instruction, but it's not quite that simple.

Here at the Depot, students work through some predetermined activities: an autobiography, written reflections, oral presentations, online math programs, and reading and math groups, but much of their time is taken up by activities of their choosing. They spend two days a week at an internship and they get at least an hour a day for self-directed learning, which often involves projects they design, aimed at learning goals of their choice. 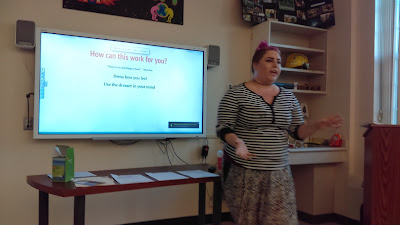 The blood typing experiment was one example, designed to meet a science requirement. Another student gave an energetic "pick-me-up" presentation this week to the whole school on the "Law of Attraction" and how positivity can benefit your life. She told her peers that negativity only attracts negative people and events to your life. She testified about the benefits she had seen: weight loss, more friends, less depression. Her peers were fully engaged, carefully filling out "gratitude lists" for the activity at the end. It was an exciting example of an interest-based project.

But this system is not without its challenges. What do you do, for example, with those students who are not motivated to do any independent work? And what content or skills should be mandatory, if any?

From what I've seen so far, most students prefer to demonstrate skills like collaboration, creativity and communication, rather than academic content knowledge, critical thinking, empirical or quantitative skills. The blood type experiment, for example, was not fully the student's choice. It was done to fill a science requirement, though the student chose how she would fill it.

Why is it that most students don't naturally want to do scientific experiments or academically rigorous projects on their own time? Why do we have to force it with requirements? Is it because their previous schooling has turned them off to academics or because they lack the skills, or both?


While I may choose to pursue a scientific research on my own time (I love Google Scholar), I'm also pretty good at it, and I've had lots of positive experiences with it, so I enjoy it. I could be wrong, but I think that's the key.

The first student would not have chosen a blood type experiment without a science requirement, even though she was interested in blood, but the second student gave talk on positivity just because she wanted to. The difference? Maybe a bit more interest on the part of the second student, but a big difference in confidence and competence. The second student felt much more competent with both the content and the skill of presenting that talk. Even though the first had more skill than she recognized--she's a natural in the laboratory--she was probably a bit intimidated by the scientific content.

If our students lack competence (or confidence) in math and science, they will not choose to study it. I've heard many students, here and elsewhere, say how they once loved science--until middle school or high school, when they started to feel they lacked essential skills to pursue it. As Dr. Ross Greene puts it, "Kids do well if they can. The real question then, is "How can we help them gain the competencies they need so they'll start choosing to pursue greater competency math and science?"


Which leads me to the question of how to increase their competence. As I read more of Hattie, and as I experience more at the Depot, I'm starting to feel a need for some blend of explicit instruction with student autonomy. Maybe they can be persuaded to pursue greater competence in these areas if adequate support is provided, or maybe there is a need for a structure that mandates science and math skills and really teaches them well to all students.

There is no doubt that options are powerful and interest is a great motivator, but without essential science and math skills, science and math really aren't even an option at all, and that's not acceptable. The world today is too technical for that. But with the right supports in place, I think they'll all jump at opportunities to do science and math.
Posted by wgreen at 1:03 PM