Why are we so stuck on extrinsic motivation? 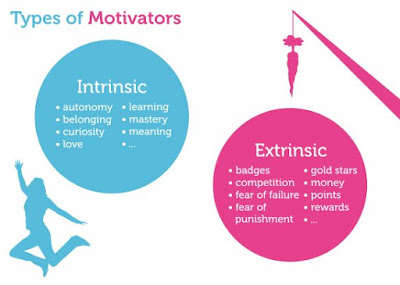 Reading through Pink's Drive a second time, I came across the passage where he mentions a huge literature review that confirmed his hypothesis, and I wondered again:

And then I came across this critique of Pink, "Memo to Dan Pink and Friends: Incentives Do Not Undermine Employee Motivation," and I realized, it's not just that people haven't heard Pink's ideas: not everyone agrees with him.

This threw me into the following sequence of thoughts:

1) Wow. I'm all wrong about this intrinsic motivation thing. Ouch. I've been blogging for a year about and running my classes based on it.

2) But that's OK. At least I'm trying to improve--pushing the envelope. Failure is fuel.

3) Wait a minute. Why aren't there any links to the studies this guy mentions that refute Pink?

4) Hmm.. and why does he pull an ad hominem, mentioning that Kohn was a school teacher and Pink a political speech writer. Why does that matter?

5) Hmm... let's see what the Harvard Business Review has to say about it. After reviewing the results of several major studies and reviews, Tomas Chamorro-Premuzic concludes, "The fact that there is little evidence to show that money motivates us, and a great deal of evidence to suggest that it actually demotivates us, supports the idea that that there may be hidden costs associated with rewards."

6) I understand it's a nuanced thing. Extrinsic rewards do motivate people to do better at mundane, routine tasks that they don't like doing, and some people do seem more motivated by money and other external rewards. But there seems no question that intrinsic rewards, like autonomy, mastery, and purpose are more powerful: "employees who are intrinsically motivated are three times more engaged than employees who are extrinsically motivated (such as by money)."

So I think I'll stick with the plan for now. Though my student's engagement levels are up and down, and not perfect (see chart), I'd rather focus on teaching them habits of intrinsic motivation than extrinsic.


The potential is there for really revolutionary change. And even though changing the educational system sometimes seems like trying to moving the pyramids of Giza, it's worth it. The data is there. They need to move.
Posted by wgreen at 10:05 AM