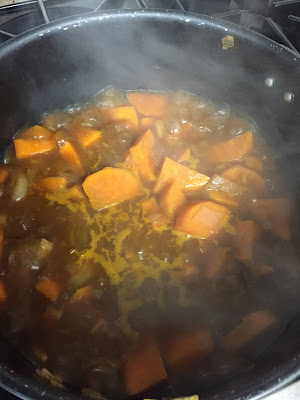 Students walking around with mugs of this delicious sweet potato soup, getting ready for our celebratory, end-of-the-week outing. Four of them had made the soup, under Ellen's direction, part of what I hope will become a regular occurrence. Earlier in the week, they made fruit smoothies, hummus, and avocado-based chocolate pudding.

Learning to plan and cook nutritious food could be the foundation for so much growth and improvement in their lives, not to mention the community-building power of sharing food together.

It was a hearty meal after a week of hard work at the E. O. Smith Depot campus, where school doesn't look much like school, and learning looks like a cup of soup. It looks like a student-led pick-me-up meeting in the morning and students brainstorming projects with their advisors, peers, and me. It looks like parent-student-advisor-director Learning Plan meetings meetings. It looks like students researching potential internship sites, making phone calls and sending emails to potential mentors, planning projects that will meet their learning goals, including math and science. It looks like students designing monarch butterfly habitats. It looks like students walking town trails, painting blazes on trees and pruning back branches. It looks like Gabe and Max.
When Gabe and Max started working on the Lynch Landing trails, they seemed kind of bored, working on one section of the trail for what seemed like a bit too long with their loppers and swatting at weeds with sticks. Then I went back and showed them the safe way to use a machete and brush hook (and told them a couple of horror stories I'd heard about surveyors who were injured with similar tools). Soon, Max was attacking a multiflora rose with the brush hook (which looks more than a little like a medieval weapon). He hacked at it steadily until the invasive plant was completely gone and disposed of, roots and all. Only an empty space of soil by the trail was left.

Then we moved to the lower meadow. The weeds down there are as tall as me and cover several acres. It is prime velociraptor habitat (I was glad it was daytime), and we needed to cut paths to the patches of milkweed for the monarch butterfly project.

Gabe started cutting a new trail through the velociraptor habitat in the lower meadow while Max cut a path from the meadow to the river bank through a hedge of brush with the brush hook. Before long, they had put in a solid hour of strenuous labor, were soaked with sweat, and used the word “adventurous” to describe the experience. 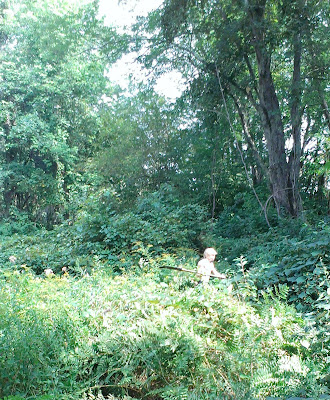 All the while, Izzie had been working like a machine, cutting another path through the meadow with a simple pair of loppers until she had 30 feet of trail right down to the dirt. And she cut carefully around the milkweed plants, which she had learned to identify.
All of this in 90 degree heat.
And without pay.

And by their choice.
It’s so cool to see students learning the satisfaction of productive work, work that adds value and helps out the community. And on top of that, they learned the proper way to use tools, identified some plants, learned about the priority of safety, and built their team.

The next morning, I gave a revised version of my "Potential" talk, which tells the story of Ben Franklin and other awesome people who started working on their goals as young people. Then I gave them each a pad of paper and asked them to write a goal on each of four pieces labelled Dream, Long shot, Maybe, and Probably: their Dream for their life, a life goal that was a long shot, but could happen, a goal that might happen, and what would probably happen. Reading some of their responses almost brought tears to my eyes--some of them have such obstacles in their lives, but they also have real goals.
And that's what this place is about, and why I'm here--to help them reach their goals, develop their potential, and find their purpose. And that's how it works--by tapping into their natural motivation and providing a learning environment that's a better fit for human nature, one with close-knit community, real food, real work, real conversations and real adventure.
Posted by wgreen at 1:33 PM