The real work is the conversations 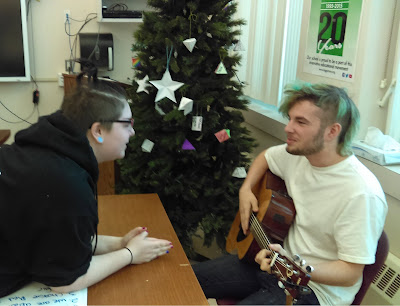 They were trying to come to an agreement about how their teams would play their next moves in our simulation of the "prisoner's dilemma." His reply was put to music, and they agreed to abandon their selfish, cut-throat strategies and start cooperating. It was a fun example of what Kerry Patterson and his colleagues call a "crucial conversation."

According to Patterson and his team, "Any time you find yourself stuck in some area of performance or improvement that's important to you, what is keeping you stuck is very often one or two crucial conversations that you're not holding or not holding well."


Lately, I feel like my life has become one big string of crucial, and difficult,  conversations. It's been like CrossFit for my relationship skills. And that's OK. In fact, maybe that's how it should be.

If my job as an educator is to do whatever it takes to see every one of my students succeed, then it's going to take lots of intentional, intensive one-on-one conversations.

It's going to take difficult conversations with a student about her depression, another about her difficult home life, another about behaviors that need to change. It's going to mean conversations about a student's need to improve his social skills or manage his anger, or another's failure to progress and need for extra support, or whether this school is the right place for him.

If my job as a human is to maximize every one of my relationships, it's going to take the same kind of effort, at home and at work. It's going to be messy, but good, and this is a big part of my philosophy of life: I want to immerse myself in it, pain and all, difficulty and all.

In our game, both teams had been using a destructive and selfish strategy. Their negotiation was an effort to change that, but in the next round, his team betrayed her trust, and maintained their destructive strategy in order to win the game. I guess his team had realized how difficult their side of the bargain would be and wasn't willing to follow through.

Of course, I'm hoping for better results from my crucial conversations, but I'm also realistic. They're not all going to fix all the problems. When I do a poor job of getting all the meaning on the table, when difficulties arise, conflicts are still unresolved, conditions still haven't improved, or one of us does something else to hurt the other, all is not lost. We begin a new conversation.

What we don't want to do is avoid these conversations. They are the real work of life. Shying away may save us some difficulty now, but we'll also miss out on the benefits later: improvement and the kind of relationships humans are built for.
Posted by wgreen at 10:04 AM