Coffee with Mara: Facing our feelings, failures, flaws and fears 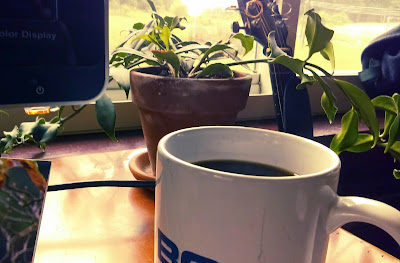 In Buddhist tradition, there was this evil god named Mara who used to try to get Buddha caught up in negative thoughts, desires, and emotions, like shame and fear.

But Buddha knew fighting this guy was just falling into his trap. He knew the way to peace was radical acceptance--just accepting things as they are, without judgement, so he took a radical approach to Mara's attack. He said, "I see you, Mara," pulled up a cushion, and invited him to sit down for a cup of tea.

I've been having lots of encounters with Mara lately. He showed up this past Thursday, when I read over the end-of-the-year student surveys. Feelings of failure and inadequacy welled up inside me as I read some pretty nasty comments mixed in with hard-to-hear, but true, feedback. The last couple of days, the issues were different, but shame, judgement, and fear still swirled through my neurons, my whole body tensing up, ready for fight or flight. Millions of years of survival instinct bracing itself against imagined threats.

Lately, I've been reading Sapiens: A Brief History of Humankind, by Yuval Harari. In his chapter on religion, he sums up Buddha's teaching about suffering: It's not the troublesome feelings or emotions themselves that are the suffering. Suffering occurs when we want painful emotions to stop or pleasant ones to continue. It's the craving, the discontentment, the tension between what is and what we feel should be. It's the lack of acceptance.

That's how I was. I was like one of my students earlier this year. She had come to my office, almost crying. She didn't want to tell me what was wrong. She said she didn't want me to think less of her. I told her that would never happen--nothing she could say would make me think she was any less than awesome. I could imagine the things she was harboring, and the shame she felt, but I felt such compassion for her and could honestly say I would love her unconditionally. That's what I need to do with myself at times like this, when Mara comes around.

Some of my most peaceful times are early in the morning, when I sit at my desk for some mindfulness meditation and a fresh cup of coffee. Looking out at the sun through the trees in the backyard, I feel at one with it all. But the other day, after a restless night of stewing, I woke up already tense.

Then I remembered the story of Mara, and I decided to just radically accept it all--what Eckhart Tolle calls "acceptance of the radically unacceptable." I imagined that everyone knew all about me, and that I was exposed just as I am... and that it was OK.

In that moment, the tension melted away.

Of course, it came back later, but that's OK, too. Whenever I accept myself with all of my feelings, failures and flaws, then fear melts away. Others might judge me, but that's OK. They're welcome for coffee, too.
Posted by wgreen at 7:50 AM