We need a new narrative

What is the Depot? According to one of our students, it's "a place where you go and come back with blue hair and piercings."

That's an interesting description, and it has a grain of truth to it. At least 25% of our students have had colored hair at some point this year. But it is also false. Many of them already had it when they came, and 75% of them never color their hair or pierce their lips.

The problem is that stories like these change the way people see us, and more importantly, the way we see ourselves.

This is the story we hear over and over again from our own students. It's the story they tell themselves about the Depot and about themselves. It's a story that shapes their beliefs and even their behaviour. And it's not true. And we need a new one.

Just like all cultures, nations, organizations, families and people, the Depot has a story that we tell about ourselves--a story that defines who we are. As Yuval Harari writes it in Sapiens, these stories are part of what makes human societies possible. According to Harari, the ability to make up such stories is what made homo sapiens so much more successful than the other homo species, like the Neanderthals. The stories that make up our religions and national histories bind us together in groups much larger than genes ever could. These stories are powerful, because they provide us with identities, guidance and justification for our actions.

For example, if you believe that humans are descended from peaceful, egalitarian, bonobo-like creatures that had sex freely with any and all members of their group, as suggested by Chris Ryan in Sex at Dawn, this will affect the way you view yourself as a human. It will provide an identity (humans are inherently peaceful, sharing and loving), and it will provide an explanation of why humans have a tendency to cheat on their spouses and why the divorce rate is so high. It will also suggest an answer to the problem.

But it will also fail to fit the data. Lynn Saxon, in her rebuttal of Sex at Dawn, called Sex at Dusk, shreds Ryan's analysis and makes a strong case that humans are naturally monogamous with a natural tendency to cheat on the side when they can. This is what is called the "standard narrative" of human sexual evolution, and it paints a very different picture of who we are and how we should live. Which story you believe will affect the way you view yourself and your world, and could affect your behavior.

The standard narrative of the Depot, that it's a place for students who "don't fit" the traditional model--a place for kids who fail, also has powerful implications. It suggests that there's something wrong with them, which suggests that they behave accordingly.

But what if it's not true? What if the Depot is just a different path to success, one where students can learn from mentors in real-world settings? What if it's a place where all students could thrive? Then we're not the Island of Misfit Toys, and they're not misfits. They're here, not because they are failures, but because we offer something that can help every student succeed, and they made an active choice to help themselves by taking advantage of it. 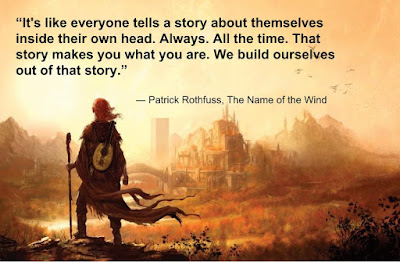 Just like societies and schools, we all have little stories about ourselves that we tell ourselves. As fantasy author Patrick Rothfuss put it, “It's like everyone tells a story about themselves inside their own head. Always. All the time. That story makes you what you are. We build ourselves out of that story.”


If your story is that you're a failure, victim, or misfit, that's going to shape you, and not in a good way. You may have baggage and challenges you've inherited from your history, but that doesn't have to be your story. Instead, your story can focus on the overcoming and the strengths and positives.

My own negative stories about inadequacy and fear and failure and rejection have hindered me at times throughout my life, and I know I'm not alone. I see my students struggle every day with the stories they tell themselves. Like the stories I tell myself, the standard narrative of the Depot gets propagated because it has elements of truth. Many of our students have failed at the main campus. Many feel they don't fit in. But the story is false. That's not who we are, and it's not what we're about. We need to change our narrative.

The truth is, we are all humans with tremendous potential and resilience, and that's much more encouraging than the fiction. The truth is, we can be what we want to be. We can write our own story.
Posted by wgreen at 6:35 AM