Has coddling destroyed a generation? 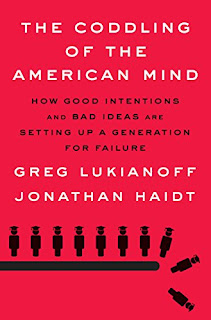 One of the most common conversations among educators these days is the rising tide of anxiety and depression among young people. This disturbing trend comes at a time when schools are already being asked to do more and more academically, and these two factors are creating a perfect storm that we are having difficulty navigating. And so we are seeing ideas like grit, resilience, social-emotional learning, and trauma-sensitivity being offered up as possible solutions, and this new book by Greg Lukianoff and Jonathan Haidt, The Coddling of the American Mind.

The basic premise of the book is that by protecting our children and students from everything from peanuts to opposing viewpoints, we have crippled our college campuses and created a mental health crisis among teens and young adults. The book is definitely worth a read. The increasing prevalence of anxiety and depression among young people is something I deal with every day, and it's clear that something has gone wrong on college campuses when speakers are being "disinvited" simply for holding opposing political viewpoints.


I also see overparenting as a major issue. It's a constant struggle as a parent to keep from overprotecting your kids from failures and consequences, and the same goes for running a school. What is needed is an authoritative approach, with clear rules and consequences and a focus on support, rather than a permissive or authoritarian approach. Coddling is a good reminder that we do damage by not allowing our kids to experience difficulty. I always viewed parenting as repeatedly casting my kids out and reeling them back in.

But while I think the book makes important contributions to the discussion, I also think it muddies the waters a bit. The authors are huge fans of Cognitive Behavioral Therapy (CBT), and they noticed that some of the cognitive errors targeted by CBT are similar to logical errors being made, in their opinions, by parents, schools, students and universities that are overprotecting kids. From there, they built their case that overzealous censorship at universities and the mental health crisis were symptoms of the same cause--what they call the "3 Great Untruths."

1. What doesn't kill me makes me weaker
2. Always trust your feelings
3. Us vs. them

While I agree that these are dangerous errors, I think this greatly oversimplifies the problem. From my perspective as an administrator, overzealous protectionism at schools has little to do with ideology or philosophy and everything to to with protecting ourselves from litigation. But that is a minor issue compared to the question of what is causing the mental health crisis.

The authors themselves mention some other possible causes of rising anxiety and depression, such as screen time (citing Jean Twenge's book, iGen). Sarah Rose Cavanagh has questioned the role of screen time, but suggested several other possible causes, including the decline of "face-to-face social communities" and economic inequality, just to name a few.

Human psychology is complex, and the changes taking place in our society are profound. Take, for example, the massive cultural shift that has been under way in our whole worldview as a society. I just finished listening to The Denial of Death by Ernest Becker. This classic lays out Becker's theory of what happens when you strip the dominant religious worldview from a culture. Who knows but that we are also seeing those types of effects today among young people?

We live in a world that has become a whitewater rapid of change--technologically, culturally, economically, you name it. Anyone growing up in such a world as this would be understandably prone to anxiety, just as much as they would if they were born in the midst of a river rafting trip.

I think our best bet in supporting them is to do just that--support them with research based practices and provide high expectations backed up by high levels of relational and academic supports. Allowing them to experience consequences is part of this, but my concern with this book is that is reflects a movement to discount the massive changes taking place today and their impact on kids. Kids today have to be tougher, in my opinion, than I had to be growing up. It means we have to be there for them even more than ever, casting them out into the whitewater and reeling them back in again, again and again.