Why study when there are so many mongongo nuts in the world? 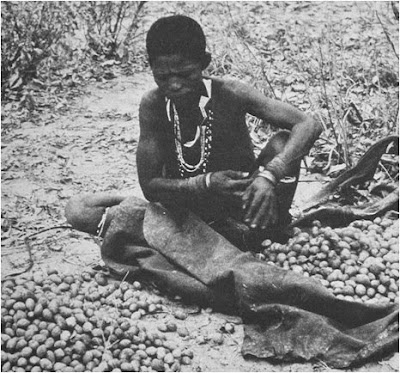 When we have to resort to external motivators, that means there's something wrong. Often, it means something we're doing is not fitting with human nature. That's why we have to force it.


And I have to wonder how much of our modern system of education and even civilization really is not a good fit for humanity at all.


Christopher Ryan tells the story of three natives of Tierra del Fuego, who were brought to England by Captain Fitzroy of the HMS Beagle to learn the ways civilization, in hopes they would serve as missionaries to their own people.

But when they were returned to their homeland, they just reverted to their old way of life--a primitive, hunter-gatherer lifestyle.

The good Captain offered to bring one of them back to England, but the man declined, saying he hadn't "the least wish to return to England," because he was "happy and contented" with "plenty fruits," "plenty fish," and "plenty birdies."

His response was similar to that of the Kalahari bushman who was asked why his tribe hadn't switched from their hunter-gatherer lifestyle to agriculture. He replied, "Why should we, when there are so many mongongo nuts in the world?"

This may apply to school in at least two ways.

First, who can blame young people who are enjoying their social lives, sports, hobbies, and freedom from responsibility, and whose parents are taking care of all their needs, if they choose not to work their butts off in school? Why bust their tails when there are so many mongongo nuts around and they haven't yet learned the "skill" of worrying about the future like we adults have?

Or maybe they feel a need to improve their lives, but their experience has told them that the educational system doesn't work for them. I imagine it doesn't take many suspensions or Fs on your report card to get that message loud and clear. No wonder these students "revert" to lifestyles they feel work better for them.


And I wonder how many young people, when presented with the modern education-career-retirement pipeline are simply not interested. And I wonder if that's a bad thing. After all, what's the point of all that education and career if it doesn't bring fulfilment, if it doesn't make us "happy and contented"?

Darwin and Captain Fitzroy didn't take the hint.  They were saddened by the inability of these "savages" to see the wisdom of the "civilized" way of life. But what if they were missing the point? What if they were the ones not seeing?

I wonder if we too easily assume that our modern systems are best without looking for how well they actually fit humans.
Posted by wgreen at 5:36 AM