What happens when you set students free to learn?

Three times per year, our students present what they've been learning to a panel of parents, peers, and teachers, and I get to sit in on every one. They are called Exhibitions, and they are a huge time requirement for me, but it I love them. They allow me to keep my finger on the pulse of the school and have a focused input into the lives of my students.

Lately, I've spent a lot of time in this blog talking about our struggling students, so I thought I'd highlight a few who are taking full advantage of the independence we offer. The Big Picture model of education is centered on internships and plenty of time for students to pursue independent learning, and at exhibitions, it's that independent learning that really shines. 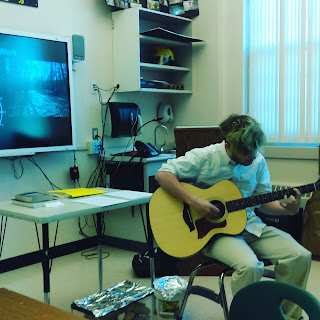 First, one of our seniors. Here he is, playing a song he wrote. He is studying music theory. In his exhibition, he described the bridge he built for a local park and the mushroom growing project he has been leading with other students. (The mushrooms are in the lower part of the picture.) He recently met with some younger students to talk about using Dungeons and Dragons as the basis for their independent learning projects. It's a unique idea--an example of this young man's desire to help struggling classmates, and it could be a powerful venue for helping them master social skills and other competencies. 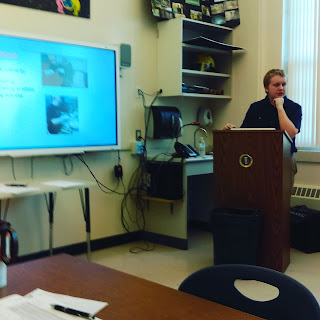 And then there's this sophomore. He's only been with us one month and already he's a leader-by-example. He's researching artificial intelligence (how cool is that?!) and creative writing techniques. He's an active part of our kitchen crew, which cooks breakfast for the whole school on Friday mornings, and I am super psyched to see what the next two years hold for him! 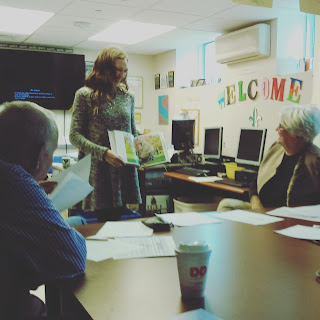 This senior is a gymnast who has a love for children that just beams out of her. Last year, she did an experiment at her internship in which she tested the effect of active play on the ability of her students to pay attention to lessons afterwards. (I love to see students doing real science!) This fall, she took a course in athletic training at a local community college. In this picture, she is asking us to analyze a photo from Humans of New York. In her advisory, they've been learning about stereotypes and the difference between objective observations and subjective interpretations. She's excited about her advisory's "Humans of UCONN" project coming later this spring. Kudos to her advisor, Shannon, for such a cool idea! 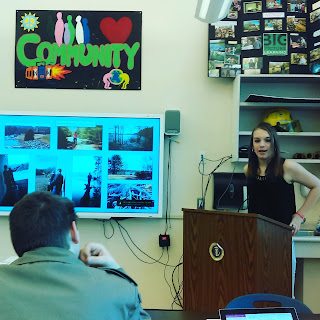 And here's another junior who loves kids. She's been doing great things at her internship at a day care center, running her own little classes and helping to schedule activities. But she has her heart set on a career health care, and she is also pursuing her interest in photography. She also designed the first "Depotwear" this year, and I love the tree logo on the sweatshirt. 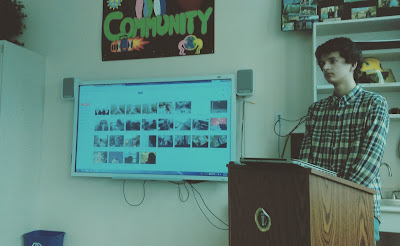 And speaking of photography, this sophomore is well on his way. This self-described "audiophile" is into sight as much he is into sound. He interns at a unique photographic studio, where he does everything from framing to developing and enlarging, and on his own time he produces unique portraits of classmates and others. 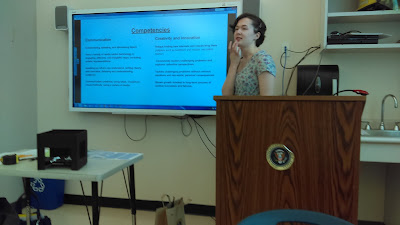 And this senior is another design-oriented student. She is auditing a set design class at UCONN this spring, and she showed us this cool project she's working on--you can see the black scale model on the table, there.  It's a set for a play that can be viewed from all angles, so the audience could sit anywhere around the stage. She interns at a local school, where she is designing a series of map-based lessons to teach her students to appreciate their diversity. She has a personal interest in minimalist living--especially tiny houses--and her senior paper was about how to go about minimizing waste in your life.

It's great to see students developing their love for learning and discovering their interests, but the main reason I love watching these exhibitions is that it gives me a chance to speak into their lives about their strengths and potential. I can tell them what I see in them--their creativity, their powerful minds, their compassion and passions, maturity, professionalism, and leadership potential.

I try to do this for every student, even those who are struggling or whose exhibitions don't display the same level of independence and drive. I do it in the hope that, with the right supports, they will get there and come into their own as the powerful learners and creators they can be.

And even with the students who already demonstrate a strong desire to learn, our work is not done. There's plenty of room for them to grow in productivity and depth and breadth of knowledge. What they've demonstrated is just the beginning.
Posted by wgreen at 5:49 AM