Me, Gramps, Brooklyn, and the boundaries of family and place 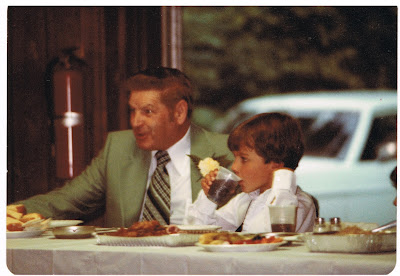 One of the things I learned, living in Mississippi during the late 90s, was the importance of a sense of place. As humans, we need to belong. But to what do we belong--a family, tribe, nationality, race, or something bigger?

When a native Mississippian asked, "Where are you from?," he didn't mean "Where have you most recently lived?" He didn't even mean, "Where were you born?" He meant, "What town are your ancestors from?"

Their sense of place blew me away, but it also resonated with me. I grew up in the woods and hills of a small town called Brooklyn, Connecticut, tucked into the northeast corner of the tiny state, right in the heart of "Swamp Yankee" country. As far as I knew, that was my nationality--Swamp Yankee, because that's what my grandpa Green always said when we asked him what nationality we were.

He had grown up in Canterbury, a town just south of us, and moved to Brooklyn as a young newly-wed. He cleared the pines on this hill in big valley of the Quinebaug River, and started raising dairy cows on its sandy glacial soil. His love of the land was so much a part of him that he spent most of his free time, after he retired from a career in politics, working it, clearing it, and tending it. He dug a big pond out back, the one that Long Brook runs through and locals fish in.

But back then it was a rough start for he and my grandmother. Stories tell of the two of them driving a car without a wind shield and sawing wood in their living room in order to make ends meet in the early days. I have often imagined grandma in her kitchen, after her morning milking duties, serving up what she called "flap jacks" to a crew of a dozen or more children, farm hands, and foster kids. It's easy to imagine, because she did the same for us, my dozen or so cousins, brother, sisters and me, later on.

Grandma and Grandpa came from a very different time. A great aunt on Grandpa's side, who hunted and cut wood well into her 70s, told me stories of growing up on that Canterbury farm. She told me how my ancestors made  apple liquor called "rot gut," in their still, steam billowing out the door of the shed. They hid the bottles behind the seat of the car in order to deliver it to a local funeral home, where it was sold in secret during the days of the Prohibition.

This is where I'm from, and it became a part of me as I grew up and worked weekends and afternoons for the family business. The dairy had morphed into a construction business that thrived for decades, and I spent my childhood digging trenches, sweeping floors, spreading loam, planting grass, and washing trucks. I can still here my grandfather saying, "If you're gonna do something, do it right," and I can still see him inspecting his car after I washed it, in his old, worn shoes and work shirt. I have him and my dad and uncles to thank for the work ethic that is rooted so deeply into my bones.

This place and these people became a part of me as I spent holidays with so many aunts, uncles, and cousins I have trouble counting them, shooting dart guns at each other, playing tag, sledding, riding snowmobiles, Big Wheels and bikes.

It became ingrained in my soul as I walked in the woods every day, setting crude animal traps, building shelters, making pine tea, camping, dipping my hands into sand springs and soaking up the earth and life around me.

It all became such a part of me that I could never separate myself from it for long. I identified so strongly with it that it always pulled me back. After spending 5 years away in graduate school, I felt that magnetism again and returned for good in 1998, dragging my patient wife back here with me. I'm glad she hasn't felt as strong a pull as I have toward her place in central Illinois and her memories of walking beans, raising sheep, and helping with the corn harvest.

Our kids were young when I was at college in Illinois and Mississippi, and my daughter's cute little southern accent didn't last long after we returned north. Now, I think, this place is almost as much a part of them as it is of me. It's been such a privilege to be able to raise them with this kind of stability.

I wonder what it would be like not to have this sense of place--this physical identity with the land and people. It seems very primal and natural--a close-knit people tied to a place with it's plants, soils and geology. I'm grateful for it, and that I could raise my kids with it.

But I know I'm lucky. I know there are millions born into millions of little Hells-on-earth, and I was lucky enough to be born into a little Eden. I just started listening to Ta-Nehisi Coates' Between the World and Me. My childhood was far from perfect and painless, but it was heaven compared with his, and there are millions who make his look like a paradise. For them, their sense of place, the culture of their childhood is more a source of pain and poison than security and strength.

And then I wonder what will happen as more and more people are displaced, living increasingly mobile lives, increasingly removed from family and homeland. Can we replace physical places with digital ones and biological families with virtual ones?

Or will it just mean adjusting to the reality that we are all family, and that the whole earth is our home? Because, after all, that's the truth. Being human means belonging to something bigger than yourself--the whole human race and the whole earth. I love what Neil deGrasse Tyson said in an interview a little while ago:


"We are all genetically related, every human being. Any two humans on Earth have a common ancestor if you go back far enough in the family tree. So the fact that you draw a circle this big around family and say 'That's my family and outside the circle it's not'--that's an arbitrary circle. That's biologically arbitrary. You've decided for yourself that inside the circle's my family, outside it's not, when we have genetic links among all human beings."

I wonder what the world would be like if we could all draw our circles larger? What if I could develop the same attachment, the same sense of identity with the whole Earth and human race that I have with my family and place here in Brooklyn?

I may have been born into a family of Swamp Yankees in the Quinebaug Valley, but I could just as easily have been born in the ghetto or worse. And more than that, this circle of family really is arbitrary, as are these boundaries of town and state and country. I really am related to everyone, and I really don't belong to this piece of land any more than any other.


I picked up pieces of Illinois and Mississipi along the way, and 15 years as a teacher in Mansfield has changed me more than I could have imagined. I am a work in progress, an amalgam of every person and place I've spent significant time with, worked with, related to. Our lives are intertwined.

It's exciting to think of the potential for absorbing pieces of other places and peoples, broadening our "circles." That's what I liked so much about Ramez Naam's awesome book, Nexus, in which he envisioned a drug that could connect people's minds, breaking down the ultimate barrier between people.

As important as family and village and tribe are, we need to somehow move those boundaries and circles out until they encompass it all. Though I am thankful for all my ancestors and homeland instilled in me, I am a citizen of Earth and a member of the human family.