Family, radical acceptance, and embracing failure: Week 5 at the Depot 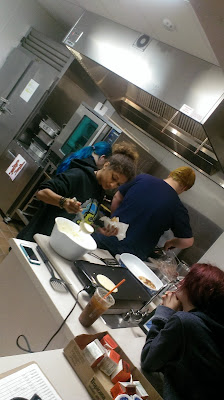 The coolest thing about the Depot is that it really is like a family. The way one student put it, it's just like a family, complete with the bickering, people who like to complain, and people you like to hang out with. In fact, the most common strength of the school mentioned by staff and students is close, caring relationships between staff and students.

There's an image in my head from this week: two students huddled around a third who came to school seriously out-of-sorts. They're all squatting on the ground trying to find out what's wrong, looks of genuine concern on their faces.

And there are other pictures: images of a radical kind of acceptance many of the students have for their peers who may have poor hygiene or other issues that might make others steer clear. It's a kind of love that doesn't even seem to notice, but embraces them and seems to understand. I'm guessing it comes from having gone through  excruciating struggles in their own lives.

I was feeling irritated with one student who came in with a seriously bad attitude one day this week, until another student explained, as if to defend him, that "he was just grumpy because he was tired." It may seem silly or naive, but it fits with Chip and Dan Heath's powerful principle from Switch: What looks like laziness is often exhaustion.

I didn't get to that part of my pick-me-up talk Friday morning, but it was a slide I needed to remind myself of this week: When dealing with people...

Yep, our "family" has it's share of conflicts. The student running up the stairs on the warpath, looking for the one who did not clean up the smoothie jar, was just one instance of the ongoing struggle with messes in the kitchen. But we're all a work in progress. When you're working with people (including yourself), your work is never done. Progress is sometimes slow. It takes relentless, never-give-up effort.

I feel like the kitchen crew could become a really powerful way to teach healthy eating, leadership, science, math, while strengthening our community. Messy counters and piles of dishes in the sink may seem to threaten that dream if we don't expect failure and embrace it as part of the process. 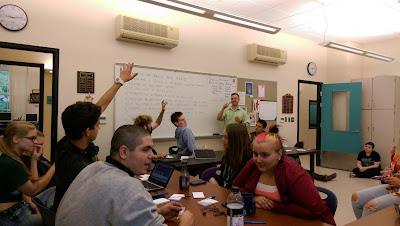 We had a "tribal council" meeting Friday and asked the students to think of rules or policies to solve the problem. At first many simply said, "Clean up your own mess!," until I reminded them that that was the current policy, and it clearly wasn't working "and when some thing's not working, you don't keep doing it. You change it." They came up with some good ideas we're going to try out, but I'm sure this isn't the end, and that's OK, because it's worth it.

Some of the bumps in the road will come from me. Case in point: I enjoy helping students explore their interests, find their passion, and pursue internships they might like, but I forget that these students have histories, advisors who know them better than I and may have developed other plans with them. It's hard to admit mistakes, and criticism is hard to take, but I need to embrace it, just like failure, just like every other step along the path to a goal. Challenges, effort, patience, failure, acceptance, small wins, joy, relief, fear, exhilaration, disappointment, exhaustion--all steps along the same path.

Every challenge or goal we hash out as a staff, every tough conversation with a student or parent, is a step. I love the steps we are taking toward measuring student mastery, clarifying our roles, building our relationships, and just improving the lives of these kids, and I love becoming a part of this family.

As for more failure? Oh, I know it's coming, but bring it on.