Small wins... and steps toward restoration 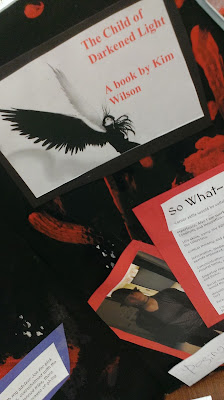 There's a student in my book team who loves to read fantasies and thrillers, but generally refuses to summarize or tell us what's happening in his books.

Wednesday, when I asked if anyone wanted to share what they'd been reading, he spent more than a minute explaining the exciting scene he had just read, which really was a cool scene.

It was just one in a string of encouraging small wins this week--little victories that are so important in a job full of challenges.

They're welcome little blasts of awesomeness, like the plot twist in the novel another student is working on, where the heroine, who recently found out her Dad is Lucifer himself, finds out he's really not that bad a guy.


Then there's the student in my QR group (quantitative reasoning) who's been getting tripped up when multiplying, dividing, and adding fractions. She's been getting discouraged. But she doesn't give up, and on Wednesday she got all of the review problems right. Maybe, like those students who ploughed through the PSAT last week, she's learning that you have to plough through failure in order to get to success.

And there's another student who just got a new job as a nutritionist at a nursing home--a job she got connected to through her internship at a hospital.

And then there was that student who almost let an earlier conflict with a classmate get the best of him just before he headed out to his internship, but made a decision not to let it get in his way, stood up, set it aside, and had a great first day.

Wow--and then there was Gallery Night--our version of open house, in which families come to the school and students present what they've been learning so far. 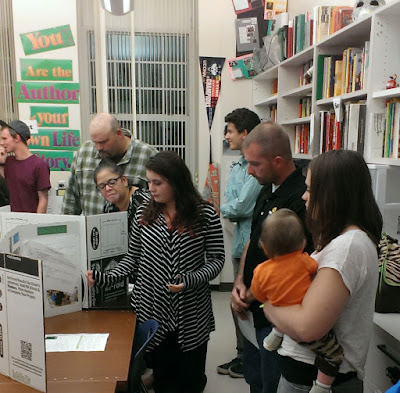 Our small building was standing room only, guests munched on delicious hors d'oeuvres some of the students had made, and I could sense the engagement of everyone there as I delivered the opening remarks.

Later, it was refreshing to see students explaining their work to their own families and those of other students.

Strong family involvement is one of the "ten distinguishers" of the Big Picture model of education, and with good reason. It really does take a village.

But those small wins were much needed, because this week was not without it's challenges. Some of these, of course, I can't discuss in a public forum due to their sensitive nature, but I thought I'd share one.

It involved a student who has a bit of a history of conflict with staff and who was refusing to do what I had asked. My first, gut reaction was to be offended, worry about appearances, and feel the need to exert my authority, threaten with consequences and punishments, and force compliance.

But I knew that wouldn't accomplish anything worthwhile.

I knew what was really needed was to identify the problem and help move the student toward better interpersonal and intra-personal skills.

It's very challenging to work this way. It would be easier to just deal out a punishment (even though that's not my style), because that wouldn't take the thought, time and effort of coming up with a more positive, proactive, and productive plan. It wouldn't require difficult, protracted, ongoing conversations about real change and restoration (and it wouldn't go against that stupid urge to retaliate--where does that come from, anyway?).

But that's what this is all about, isn't it? It's about restoration, not retaliation.