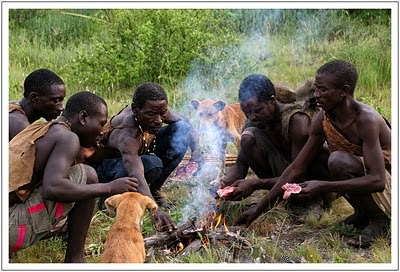 This might seem strange coming from an aspiring school leader, but I'm really not much for hierarchical authority structures and top-down leadership.

And I think I'm in good company. I've been reading Christopher Ryan and Cacilda Jetha's powerful book, Sex at Dawn, which lays out their theory of our ancestral heritage. It's a fascinating book, and has been playing a key role in my thinking as I think about a better fit between modern life and human nature.

Hierarchical leadership structures were non-existent in the world of our palaeolithic ancestors. Instead, Palaeolithic societies were decidedly egalitarian:


"When you can't block people's access to food and shelter, and you can't stop them from leaving, then how can you control them? The ubiquitous political egalitarianism of foraging people is rooted in this simple reality. Having no coercive power, leaders are simply those who are followed--individuals who have earned the respect of their companions. Such "leaders" do not--cannot--demand anyone's obedience."

They quote Adam Smith, of all people, who wrote similarly, "In a nation of hunters there is properly no government at all... [They] have agreed among themselves to keep together for their mutual safety, but they have no authority one over another."

In fact, Ryan and Jetha say that, according to primatologist Christopher Boehm, "foragers are downright feline in refusing to follow orders... 'universally--and all but obsessively--concerned with being free of the authority of others.'"

If this is the way we evolved--if it's in our DNA, then it sheds some light on the way we humans tend to behave. (Funny that my former boss, veteran science teacher Julia Sherman, used to say trying to get all of us on the same page was like "herding cats.")

And if this is the way we evolved, let's tap into it. Let's make our schools and classrooms less hierarchical, less coercive, less authoritarian, and more egalitarian and democratic, less about about control, and more about relationships and organic, self-organizing growth.

At the school-level, we might start with strategies like empowerment evaluation, distributed leadership, Hargreaves and Fullan's concept of collective autonomy, and in general, more collaborative decision-making.

At the classroom level, let's start by treating students less as subjects or subordinates and more like equals and collaborators in their own learning.

Still working on this, but I think this is key. Any time we can make our structures fit better with human nature, it's like like letting rocks roll downhill.
Posted by wgreen at 2:28 PM