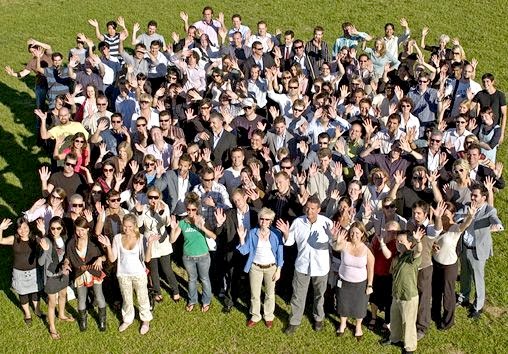 As we work towards creating a world more in sync with human nature, one of the obstacles we are going to run into is Dunbar's Number. Anthropologist Robin Dunbar and others have suggested that humans work best when they live in bands no larger 150, the limit on the number of social relationships a human mind can manage at one time.

According to Christopher Ryan and Cacilda Jetha, authors of Sex at Dawn, with groups sizes smaller than this, there is no anonymity: everyone knows everyone else, and our behavior changes--for the better. We treat each other better. We share everything. Over this number, anonymity kicks in, and with it, all sorts of anti-social behaviors and dysfunction.

Below this number, in primitive societies, hypersocial communal living was the norm. Communism fails, say Ryan and Jetha, because of this factor. The tragedy of the commons only happens in resources with large-scale, anonymous access (overfishing, air pollution, not on the colonial greens and in the forests of primeval man, where social relationships held everyone in check.

Below this number, egalitarian, democratic governance rules. Above it, governments and power become more and more concentrated and centralized. (I seem to remember Ghandi saying something about the ideal government being at the village level.)

We've long since passed Dunbar's Number in most human settlements, and I was wondering how this problem of discord could ever be solved. Then it occurred to me: if anonymity is the problem, what if we could eliminate anonymity altogether?

I think it's happening already. Digital and online technologies are quickly making anonymity a thing of the past. Witness Justine Sacco's unfortunate Tweet in 2013. Even the brilliant Dread Pirate Roberts couldn't hide forever in the digital world.

Anonymity from oppressive, centralized governments may be a good thing, but in the modern "tribe" of society, it's really not. In a primal tribe, there was nowhere to hide, and no choice but to treat people well or be cast out. And maybe there was more trust. Maybe more kindness. More humanity. And maybe that sort of thing is not outside the realm of possibility in the modern world.