Are we lighting fires or quenching them? 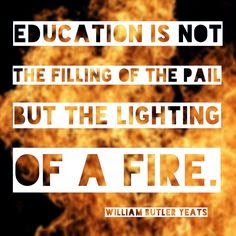 Jim (not his real name) was an at-risk student in my general science class two years ago. When he started the class, he talked very little, was totally unmotivated, had frequent run-ins with classmates, and generally had a very resistant, almost intimidating air about him. He had little interest in work.

A couple of months later, the whole class was sitting family style around a cluster of desks, passing around the "ingredients" for esters that smelled like wintergreen and bananas, and Jim was starting to like science. He started showing up early for class, asking what we were doing that day. By the time we were passing around the ingredients for (really cool) silvered holiday ornaments, Jim was making extras for his classmates who couldn't make their own.

I saw Jim a few weeks ago and asked how he was doing. "I wish I could take more science," he said, "but it didn't fit in my schedule."

Jim's on track for graduation in June.


Sometimes I wonder if I'm just being too easy on students like Jim: when I de-escalate rather than punish, when I encourage but don't pressure them to do their work, when I allow multiple attempts and revisions, or don't penalize for lateness or allow zeros, when I try to motivate with interest and autonomy rather than penalties and threats and grades.

In my biology class right now, most of my students are doing better in my class than in any of their other classes. As a few of them discussed how well they were doing, I said, "Do you think this class is too easy? Do you think I'm too easy on you?"

"This is my favorite class," said one girl with Cs and Ds in all of her other classes. "Your the best teacher I have ever had."

"That won't earn you any points," I replied with a smile.


Though I've been concerned about the pace at which we're moving through the curriculum, I was excited about how they did on the test they took this week. And I don't think I've been too easy. I think it's like Maslow's Hierarchy. It's hard to value learning when "learning" seems hostile to you, or when it seems to be saying you're incapable--a failure. Self-efficacy, confidence, and connections (relationships) are prerequisites to higher interests, like learning.

How do you get confidence if every time you turn around there's another F? But once you start liking class--once you see that learning is fun, and that your good at it...


It's a delicate balance: between pushing and supporting, but one things for sure, we need to stop seeing school as a filter whose only job is to push and see who can make it. "Education," said Yeats, "is not the filling of a pail, but the lighting of a fire."

What are we doing as teachers? Testing the strength of fires, and quenching them if they're not strong enough? Or are we starting them and stoking them?
Posted by wgreen at 2:51 PM