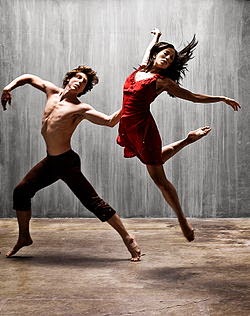 I was talking with a classmate last week about how easy it is to start feeling like our administrator prep program is a competition, with all of us competing for a limited number of positions as we start our job searches.

So this principle from Pink (To Sell Is Human) hit home today:

The principle comes form improvisational acting. When you're an improvisational actor, the strategy is to listen carefully to what your counterpart says, and then build on it in such a way as to make your partner look as good as possible. Rather than making you look worse, you'll both look better, and the whole thing looks like it was planned, like a dance.

And that's how life should be, right? Not a competitive, zero-sum, win-lose struggle for supremacy, but a cooperative dance of mutual benefit.

One practical strategy Pink suggests is called "Yes, and.." Too often we get caught in battles of "Yes, but.." Contradicting and questioning each other in an endless competitive circle. What if, instead, we always said, "Yes, and..." and then built on each other's suggestions instead of tearing them down.

I'm anxious to try this out in the classroom. When a student answers a question inaccurately during a class discussion, I usually try to emphasize what he or she got right. But Pink's strategy is more powerful. You listen carefully, say "Yes," and and then build on what the student says. The result is that instead of the usual competitive game of right and wrong, the whole thing becomes a dance.

I've posted before about Chris Ryan and Cacilda Jetha's awesome book, Sex at Dawn. One of the coolest things about their book is the picture they paint of a human nature that is basically cooperative and hypersocial, rather than competitive and aggressive. Being human is all about this kind of dance of mutual benefit. And this isn't some kind of pie-in-the-sky mystical idealism. It's what makes us tick. It's how we work.

If we want workplaces, classes and classrooms that fit better with human nature, we need less competition and more cooperation, less contradiction, and more collaboration.
Posted by wgreen at 3:19 PM