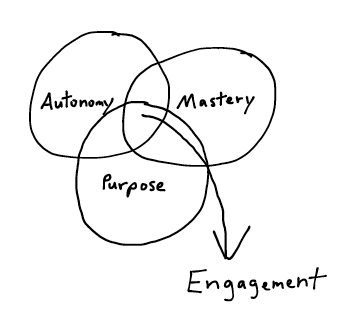 Today I started class by making some points about their Gattaca responses--most of them had some revision to do. I had thought about just giving them credit so they could move on to the next assignment without revision. Decided against it. I want all of their work to be quality work. Nothing just for credit.

Same thing went for their cancer prevention assignments. A few had been turned in, so I had seen that they need to go for more depth on their explanations and use of reliable references. So I touched on that as well in my daily de-briefing.

Then I introduced our new +Starr Sackstein-inspired system for setting goals and self-grading for the next assignment (the discovery of DNA). I told them they would grade themselves afterwards and I would only change it if I felt they had over or underscored themselves.

Then they got to work.

And they worked steadily for the entire first period... and most of the next. The first to drop off and disengage did so a full hour and a half into the two-hour period. That's 75% engagement. And that was the minimum. And that was 1.5 hours of fairly steady, largely self-directed work. Couldn't expect more form a room full of full-fledged adults like myself. No threats. Just autonomy, mastery, and purpose.

I moved from group to group, discussing cancer, their projects, people we knew who were affected, discussing what it means to explain how something prevents cancer, discussing nutrition, a mix of student-initiated and me-initiated conversations.

As he finished his project near the end of class, one student asked, "Do plants get cancer?"

"I don't know," I said, "maybe when they get those growths--burls on them. Maybe that's cancer, but I don't know."

He opened a chromebook to find out.

He reported back later, excited: "Yes, they can get cancer, but it doesn't spread like it does in humans, because their cells don't move."

And that... that is what it's all about. Why am I surprised this works?