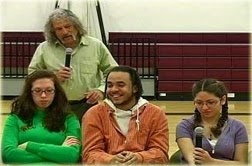 I had the opportunity last night to see the Looking In Theatre from the Greater Hartford Academy of the Arts.

It was an amazing learning experience. These teens act out bullying and related scenarios experienced every day by high school students, then they sit down and answer questions from the audience, first in character, then as themselves.

As a teacher, parent, and hopefully soon, school administrator, I was captivated. I kicked myself later that I hadn't had my bullet journal on me to take notes during the discussion--it felt like such a gold mine of data. It was great to hear (and see) their perspectives on what it's like to be a teen today and their thoughts on how we could better help them and improve schools.


A few insights stand out in my mind.

One of my colleagues asked the students what they thought of anti-bullying assemblies like the "Names" program, which includes an "open mic" time, when kids tell their stories. This young woman said that they do make a difference. That day everyone is nicer. But then it wears off. "We need to be reminded that there's more to people than what's on the outside."

Isn't that the truth. It's so easy to forget.

And when asked why she was so mean, why she would tell another students she should "just kill herself," one female student answered (in character) that it was how she showed her peers that she was strong, that she could handle anything.

I thought of how I'd read that adolescents are so socially minded that everything revolves around their social status, and only as they mature are they able to place things in proper perspective. This is what one young lady last night called "growing up."

For many high schools, the self is so tied up with that of their peers, it is hard to see things properly.

But at  The Greater Hartford Academy of the Arts, these students feel accepted. Maybe it's because the school attracts more accepting kids, or because the cosmopolitan environment frees them from cliques and normal peer pressures forces them to be open and accepting. Or maybe, as one student suggested, it's because kids simply want to be there--want to be learning about things they care about, so they are not all set on edge by constantly being forced to do things they don't want to do.

Whatever the case, I think we need to focus in on these bright spots, like the Names program and accepting school cultures and climates like The Greater Hartford Academy of the Arts, and try to replicate them throughout the year and across schools. Then, maybe we can really help.
Posted by wgreen at 2:35 PM